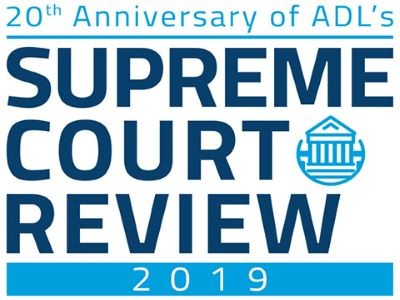 With a new Supreme Court justice on the bench and additional challenges to execute actions, this year has been an eventful term with significant ramifications.

Join us for an America's Town Hall program with distinguished legal scholars Erwin Chemerinsky, Paul Clement, Frederick Lawrence, and Dahlia Lithwick as they discuss the most important cases of the term, including adding the citizenship question to the 2020 census, partisan gerrymandering, and religious symbols in the public square.

They will also discuss challenges to the president's executive actions in the lower courts and what to expect at the Supreme Court next year.

The event is presented by ADL and the National Constitution Center. Hosted by Gates Eisenhart Dawson in partnership the Cardozo Society of Silicon Valley